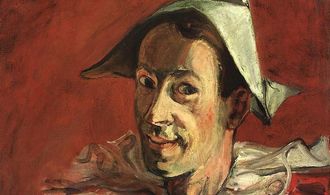 In 1914 engaged at Kiev art college

Since 1925 exposed his works at saloon of Independants, Tjulri, Autumn

The painter, the chart, the set designer.

From the Jewish family, the brother of artist I.Minchina. In a youth studied to jeweller art. In 1914 was engaged at the Kiev art school; probably, took lessons in A.A.Ekster's studio.

In 1923 has emigrated; leved in Berlin. Worked as the theatrical set dresser at the Jewish theatre. Has passed through hobby for a cubism. In 1916 with group of the russian-Jewish artists has moved to Paris; has approached with H.Sutinym and Z.Shagal.

Since 1925 exposed works on salon of Independent, Tjulri, Autumn. In 1928 three pictures of the artist were exhibited at Russian department of modern French art in Moscow. In 1929 has lead two personal exhibitions in Paris. Has soon found patronage of influential marshal R.Gimpel, has received creative freedom and has lodged in Mediterranean small town La Gard in Provence where has arranged a workshop. Has died of a tuberculosis.